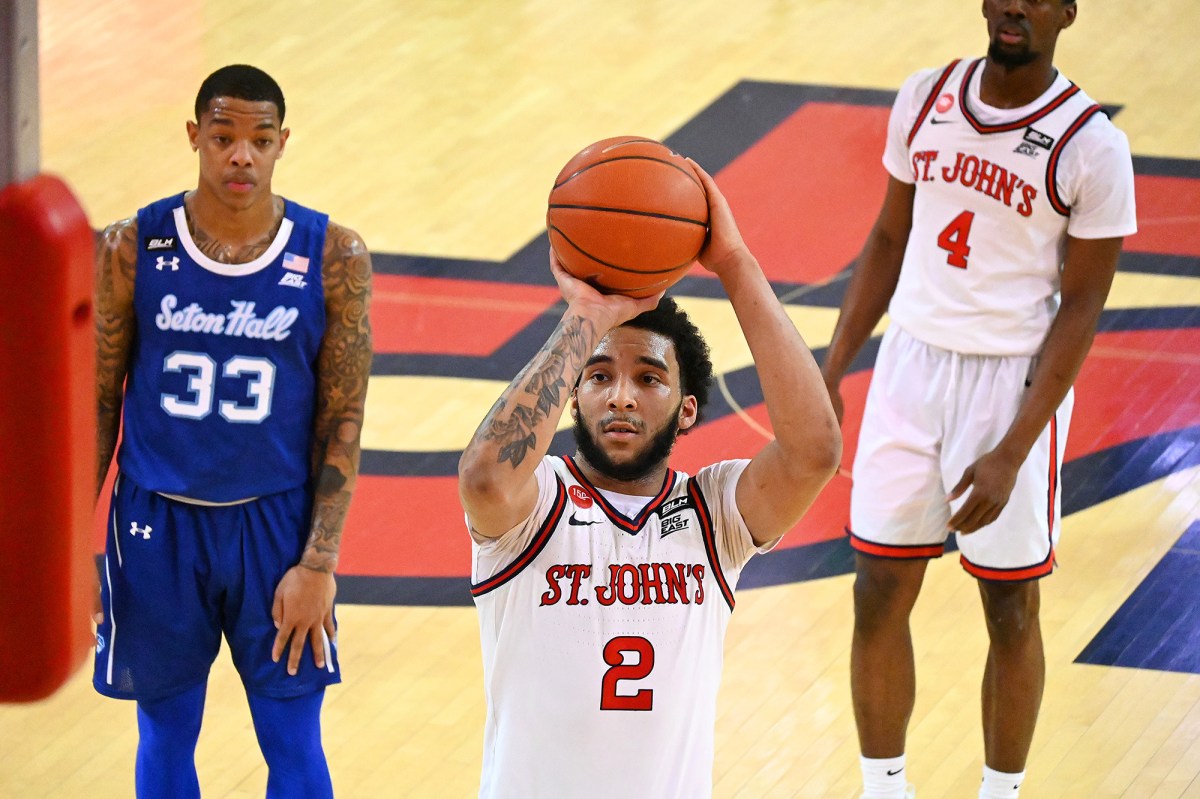 Rarely has there been more on the line. Twice a year St. John’s and Seton Hall meet, but almost never like this — with so much riding on the outcome. Thursday’s Big East Tournament quarterfinal win…

Rarely has there been more on the line.

Twice a year St. John’s and Seton Hall meet, but almost never like this — with so much riding on the outcome.

Thursday’s Big East Tournament quarterfinal winner will stay alive in its quest for an NCAA Tournament at-large berth. The loser’s season either will be over or it will be ticketed for the NIT. The survivor likely will face compromised Villanova, the No. 1 seed, which is without star guards Justin Moore and Collin Gillespie, Friday night and will have a real shot at playing for the title Saturday night.

“They’re fighting for the same thing we’re fighting for, and that is to survive and advance,” said St. John’s Mike Anderson, the Big East Coach of the Year. “I always say the first game is the biggest game because you can’t do anything else until you play that game. That’s the mindset we have. The only difference now is it’s a different season. It’s a one-game season. It is the postseason.”

It will be an intriguing afternoon at the Garden when No. 4 St. John’s and No. 5 Seton Hall meet in the rubber match. Each team beat the other comfortably at home. On Dec. 11, the Pirates rode tri-Big East Player of the Year Sandro Mamukelashvili’s 32 points to a thorough 77-68 victory. Just five days ago, in a bizarre contest, the Red Storm rallied from an 18-0 deficit for a commanding 81-71 victory in Queens, despite the absence of Big East Freshman of the Year Posh Alexander. That win snapped a three-game St. John’s losing streak to Seton Hall.

Alexander has practiced this week and expects to play Thursday, a major boost for a team that is coming off impressive home wins over Providence and Seton Hall. Described by Anderson as the team’s igniter, Alexander is the first player since Allen Iverson in 1995 to be voted the Big East Defensive Player of the Year — he shared the honor with Connecticut’s Isaiah Wahley — and Freshman of the Year in the same season. He keys the Johnnies’ pressure defense, and ranks seventh in the country in steals per game with 2.6.

“Posh is Posh,” sophomore star Julian Champagnie said. “He brings something to the table that is unique.”

The game will also present a different dynamic for the Red Storm. St. John’s will get to play in front of family and friends for the first time this year, as all eight teams left have been given 100 tickets for Thursday.

St. John’s (16-10) is playing much better basketball at the moment. It closed the regular season winning nine of its last 12 games to finish in fourth place after starting 1-5 in conference play and received a first-round bye for the first time in six years. Seton Hall (13-12) was at one time considered close to an NCAA Tournament lock. But the Pirates enter Thursday having lost four straight games, and now find themselves on the wrong side of the bubble, needing at least one win, if not two, to extend their streak of going to the Big Dance for five straight seasons.

Seton Hall’s strengths are its experience — it features four seniors — length and scoring up front. St. John’s two best players, Champagnie and Alexander, are underclassmen, and it relies on depth, pressure defense and an uptempo style.

The two teams appear headed in opposite directions. Seton Hall may be on its way down, St. John’s on its way up. The local rivals have met in the Big East Tournament just three times, and not since facing each other in the first round in 2002. This is one of the most important games in the history of this rivalry.

“I feel like we’ve worked for this opportunity, honestly,” Champagnie said. “In our minds we’re a tournament team.”

They get a chance to prove it, starting against their rival Thursday afternoon.
S

Play out game. Loser is out, winner has to get to the finals to even have a chance.
M

shu09 said:
Play out game. Loser is out, winner has to get to the finals to even have a chance.
Click to expand...

Hoping Willard says something more motivating than this - “they keep coming at you, at you, at you. “ What about coming BACK at them with a plan and passion. Let‘s go team and Willard - get angry and get even!
Reactions: silkcitypirate
You must log in or register to reply here.

What St. John’s must do to become Top 25 team