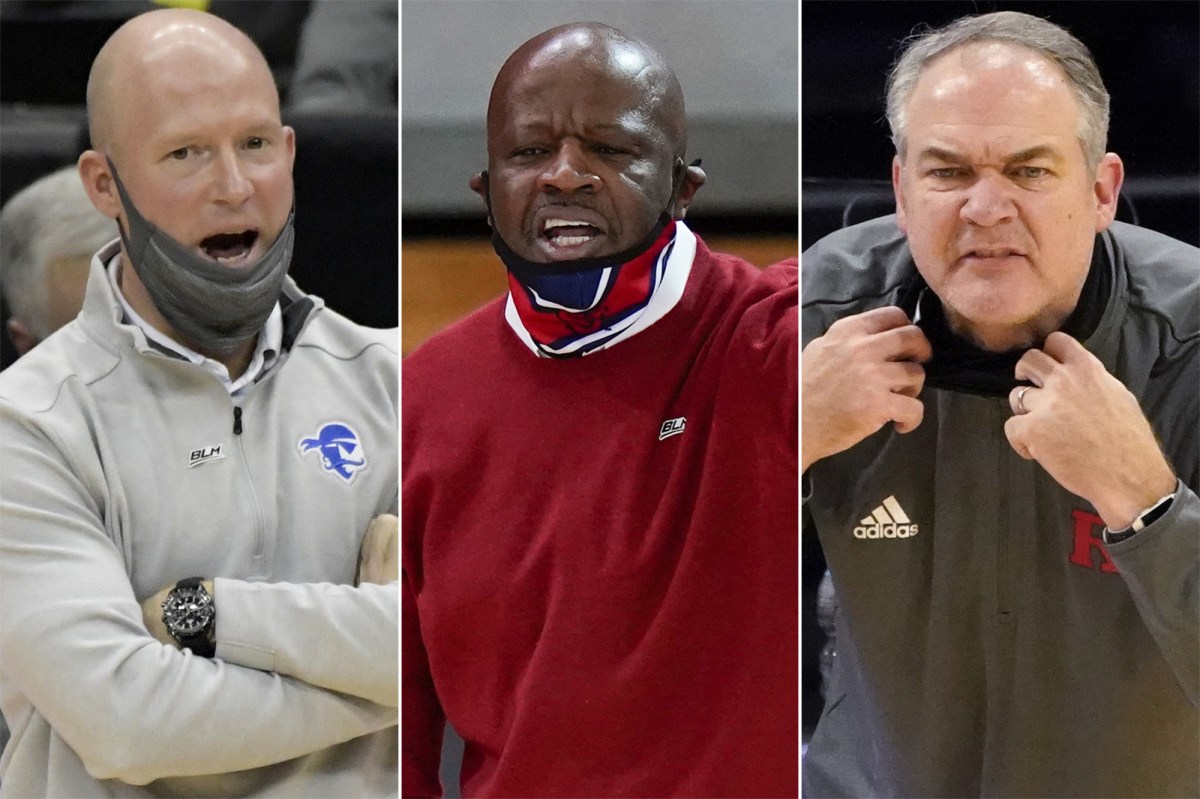 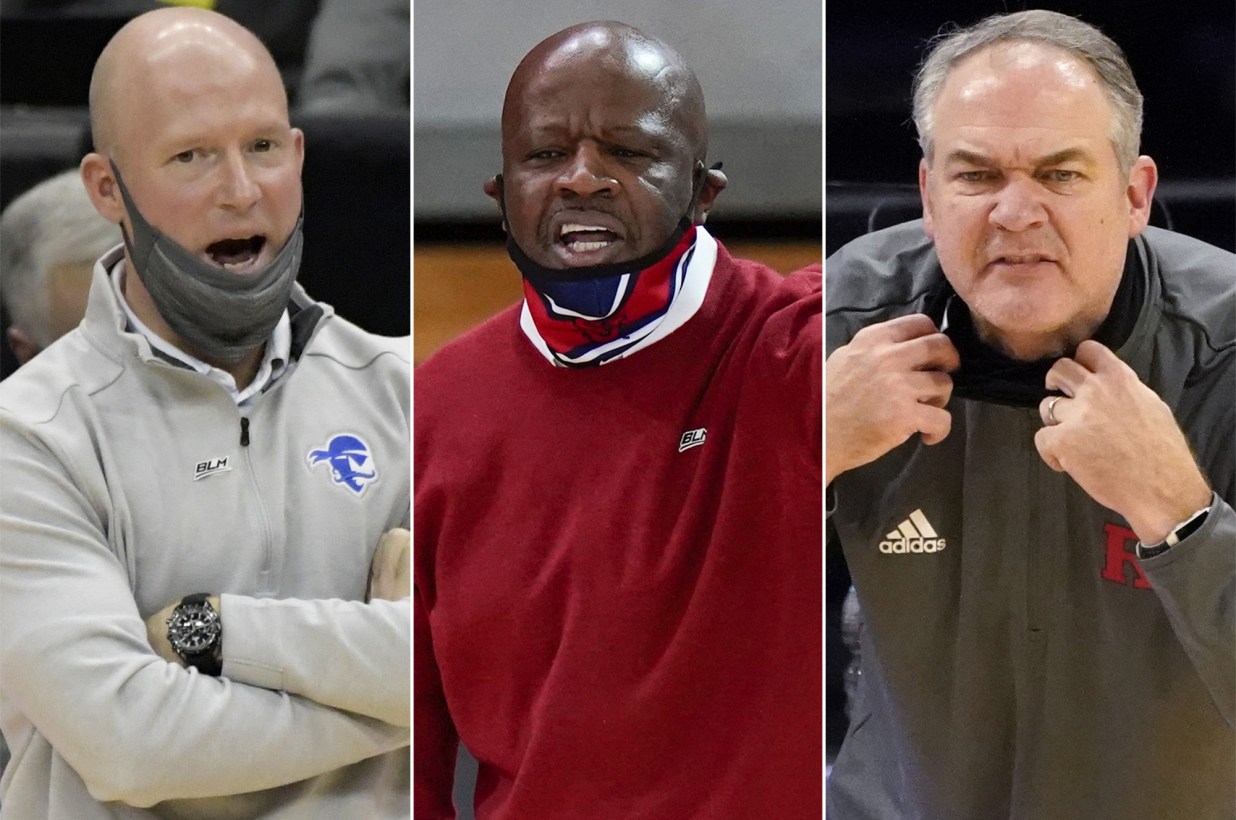 For St. John’s, Rutgers and Seton Hall, that is the common denominator. With five weeks to go until Selection Sunday, all three are firmly in the NCAA Tournament mix — the last time the three power-conference locals all went Dancing at the same time was 1991 — and they have built their programs in similar fashion.

With grind-it-out coaches — Mike Anderson for St. John’s, Kevin Willard for Seton Hall and Steve Pikiell for Rutgers — who emphasize defense and live and breathe the sport, coaching staffs that develop talent instead of merely procuring it, and players that fit their style of play.

Look at the key players in these programs. Myles Johnson, Geo Baker and Ron Harper Jr. at Rutgers. Rasheem Dunn, Posh Alexander and Julian Champagnie at St. John’s. Sandro Mamukelashvili, Jared Rhoden and Myles Cale at Seton Hall. Only one of those players — Cale — was a four-star recruit. He was the lone player to crack the top 100, and he just snuck in at 92.

They have all improved significantly, some quicker than others. Champagnie leads the Big East in scoring as a sophomore. Mamukelashvili, a senior, and Harper, a junior, have made the watch list for the nation’s best power forward and best small forward awards. Alexander has been one of the very best freshmen in the country.

The two New Jersey schools have seen their recent success pay off on the recruiting trail. Rutgers landed top-50 in-state forward Cliff Omoruyi, a current freshman. Seton Hall’s run started with the mega 2014 class headed by McDonald’s All-American Isaiah Whitehead, and it has a top-25 group coming in next year. St. John’s landed a quality three-star recruit in Rafael Pinzon of Long Island Lutheran for next year, a step in the right direction.

Fans love highly ranked prospects. But sometimes fit is more important than the amount of stars next to a player’s name, and what kind of worker the kid is.

Alexander wasn’t ranked highly — 247Sports had him 254th in his class — but few freshmen have been better. Johnson, Rutgers’ defensive backbone, was ranked 371st. Mamukelashvili, a premier power forward in the country, was 199th. These coaching staffs recruit with their eyes, not what the recruiting analysts tell them. They maximize their talent.

It is clearly working.

The teams all seem to be surging at the right time. Rutgers has shaken off a five-game losing streak to win four in a row in the rugged Big Ten. Seton Hall answered a three-game skid by winning consecutive road games this week at Providence and UConn. Both were projected tournament teams though, so neither really is a surprise.

St. John’s is the outlier. I picked the Johnnies to reach the NIT. They weren’t on anyone’s radar until upsetting No. 3 Villanova on Wednesday night. Now, after six straight wins and seven victories in eight games, the tournament seems realistic, provided Anderson’s team can finish strong, and win at least three of its remaining seven conference games.

It really is a shame the virus has prevented fans in the area from attending games at the RAC, Prudential Center, Madison Square Garden and Carnesecca Arena. We haven’t seen a season like this in two decades, three hard-working, selfless teams that not only look capable of taking part in March Madness, but possibly can do some damage there also. At least these teams have given their supporters a reason to smile in these difficult times, and they have done so in a similar way.

Big Questions
Right now, I don’t know what to think of the Big East. St. John’s is its hottest team. Villanova and Creighton have been shaky. Providence and Marquette are cratering. Georgetown is playing inspired basketball, after beating Creighton and nearly upsetting Villanova on the road. Xavier is in another COVID-19 pause and it’s hard to get a gauge on UConn until star guard James Bouknight returns. The only certainty is DePaul is the worst team in the league.

For most of this season, I felt there were some clear tiers, with Villanova and Creighton at the top. They still are atop the league’s standings, and likely will finish there, but that doesn’t mean the conference’s two ranked teams are clearly better than St. John’s, Seton Hall, Xavier and UConn. At the moment, they definitely are not.

It should make for a fascinating Big East Tournament in a month at the Garden.

If there is one team in the West Coast Conference that belongs on the same court as Gonzaga it is BYU, a projected tournament team led by 7-foot Purdue transfer Matt Haarms. The first meeting, an 86-69 Gonzaga romp that wasn’t even as close as the final score indicated, wasn’t very competitive. But BYU is home, where it is 7-1, and the Zags have shown some slippage of late, struggling for 30 minutes against Pacific in their latest win.

Gonzaga’s Jalen Suggs and Oklahoma State’s Cade Cunnigham have dominated most of the top-freshmen-in-college-basketball talk. They are lead guards and exceptional talents. Evan Mobley, USC’s 7-foot freshman, is right there with them. He’s led the Trojans to the top of the Pac-12, doing a little bit of everything, from scoring (16.3) to rebounding (9.0) and blocking shots (2.9) to distributing (2.0). Behind Mobley, USC has won 10 of its last 11 games and looks like a force. This may be Andy Enfield’s best team since taking the job eight years ago, in large part due to his one-and-done star.

You remember him, right? Led Loyola Chicago to the Final Four, turned down St. John’s head-coaching job. He’s back with another good team. The Ramblers have won 10 straight games and are now tied with Drake atop the Missouri Valley Conference. They allow just 56.2 points per game (fewest in the nation), are ranked sixth in the country in adjusted defensive efficiency and are led by center Cameron Krutwig, a key piece to that Final Four team three years ago. You wonder how much longer Moser will stay put. DePaul, which will likely have an opening this spring, could do a lot worse.

A few weeks ago, I thought Creighton was the best team in the Big East and a legitimate Final Four contender. Right now, the Bluejays aren’t even a second-weekend lock. They have played that poorly. They’ve still managed to win some games, barely getting by DePaul, Marquette and Seton Hall, but this team is not playing well. Of late, Creighton has dropped games to Georgetown, Butler and Providence, teams that are not going to make the tournament. Big East Preseason Player of the Year Marcus Zegarowski is a big part of that. He was better last season and if Greg McDermott’s team is going to be a March factor, Zegarowski has to perform better.

The Hawkeyes couldn’t blame their woeful defense on Sunday. They held Indiana to 67 points, yet still lost for the fourth time in five games, and now sit in the middle of the Big Ten with a difficult remaining schedule that includes Rutgers, Michigan, Wisconsin and Ohio State. Iowa’s offense let it down Sunday for a change — it shot just 37 percent from the field — after allowing at least 80 points in its three other recent losses.
Reactions: Bluebeard and mikewalsh
S

We talk of the 80s as the best of the BE, but 7 out of 9 BE teams made the tourney in '91
Reactions: Section112, Bluebeard and Hallsome
M

St. John's is the surprise team this season. Not sure if I agree with Zack, "provided Anderson’s team can finish strong, and win at least three of its remaining seven conference games. ". A 3-4 finish for the Red Storm leaves them at 10-10 in the BE, they'll probably need at least one BET win.
H

I remember I drove to Atlanta for the weekend games in 91 with a new girlfriend. We had planned a nice weekend around NCAA hoops. I was so upset that RU blew the game against Arizona State that I made us drive home immediately after the loss. Needless to say, that relationship did not last long.
Reactions: donnie_baseball, Section112 and TheHall87
S

That was the year Syracuse lost to the 15 seed Richmond Spiders in the first round. Also, fun to write. Friggin UNLV squashed our final four hopes.
Reactions: Bluebeard
T

SHUMAN said:
That was the year Syracuse lost to the 15 seed Richmond Spiders in the first round. Also, fun to write. Friggin UNLV squashed our final four hopes.
Click to expand...

That was the return for helping us get to the 1989 Final Four by knocking off Arizona for us.
Reactions: SHUMA04, radecicco and Section112
S

TheHall87 said:
That was the return for helping us get to the 1989 Final Four by knocking off Arizona for us.
Click to expand...

Good way to look at it. I remember the 89 unlv team chirping that they were going to run us out of the building (forget the exact quote).

There was not a lot of respect coming from UNLV for that game. And it started at the top with the towel chewer.
T

There was no shame in losing to that 1990-91 UNLV team, one of the very few teams to go unbeaten to that point in the season since Indiana's 1975-76 season.

They manhandled a lot of very good teams that year and were versatile enough to win scoring big (100 or more points 14 times) or slowing it down (they won one game 49-29 and beat a ranked Princeton team 69-35).

They beat us by 12, they only won two games by fewer than that all season, a seven-point win over a No. 2 Arkansas team on the road and an eight-point win in their second round NCAA game against Georgetown. They had three other 12-point wins one at Louisville and two against a ranked New Mexico State team during Big West play.
Reactions: SHUMA04
M

Not sure I would characterize any of the three as grind-it-out guys. Lots of coaches emphasize defense. Is the Texas Tech coach a ground-it-out guy? Rutgers has the BIG Ten moniker to put forward as well as the state's deep (?) pockets. St. John's is the number one team in NYC, the nation's largest city and TV market. I think Willard accepts that he is unlikely to land top 50 or 75 kids, and looks for certain kinds of kids: Rhoden, Sanogo, Ro, Quincy, Nzei; he also believes kids can be coached to get better.

This year, Geno has the no. 1 kid in the nation, but last year, Aubrey Griffin was no. 35.
There isn't player who fits that UCONN mold more than Aubrey. She is a real and selfless winner.

FWIW, St. Peter's also made the NCAA in 91.
You must log in or register to reply here.